“Expecting” is one of the webcomics produced by ERCcOMICS. ERCcOMICS is a EU-funded project aiming at communicating cutting-edge European research thanks to the power of visual storytelling.

Unlike other categories of migrants, undocumented pregnant women are a growing phenomenon, yet few social science or public health studies address EU migrant maternity care. As an exception, EU Border Care, led by Vanessa Grotti, is a comparative study of the politics of maternity care among undocumented migrants on the EU’s peripheries. EUBorderCare also focuses on the empirical analysis of personal and institutional relations of care and control in the context of pregnancy and childbirth in some of Europe’s most densely crossed borderlands in France, Greece, Italy and Spain.
Expecting by Sandrine Martin is a delicate and memorable story that involves the reader through many details and data collected by EUBorderCare and while avoiding rhetoric and stereotypes. Expecting is about the parallel paths of Sham and Matina – a migrant refugee from Syria and a Greek midwife working for an NGO, respectively. To create Expecting, the artist Sandrine Martin and the researcher Vanessa Grotti with her team – notably with Cynthia Malakasis – exchanged points of views and impression at length, and also travelled together to a refugee camp in Greece.

ERC means European Research Council. Since 2007, the European Research Council funds thousands of ambitious science projects. The ERC’s mission is to encourage the highest quality research in Europe through competitive funding and to support investigator-driven frontier research across all fields, on the basis of scientific excellence. The ERC approach is ‘investigator-driven’ and ‘bottom-up’ by nature, which allows researchers to identify new opportunities and directions in any field of research, rather than being led by priorities set by politicians. This ensures that funds are channelled into new and promising areas of research with a greater degree of flexibility.

Comics means… comics! And that’s what ERCcOMICS is doing: 16 comics about ERC-funded science. 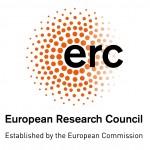