Wauter Mannaert became a master of arts at the Sint-Lukas in Brussels and started working as a comics artists thereafter. He started making comics reportages in 2011 together with Eva Hilhorst for the weekly Brussels’ newspaper BDW, now Bruzz. For this newspaper he makes a cartoon weekly. His graphic novel ‘El Mesías’ on the struggle of a small village in Spain against capitalism, and Weegee, about the famous photographer, are well received by the press.  In 2019 his comic Yasmina and the Potato Panic, the first of a series about Yasmina, a young girl who is fighting for a better food production. Yasmina was translated into several languages. 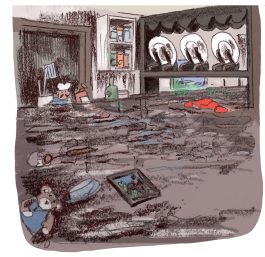