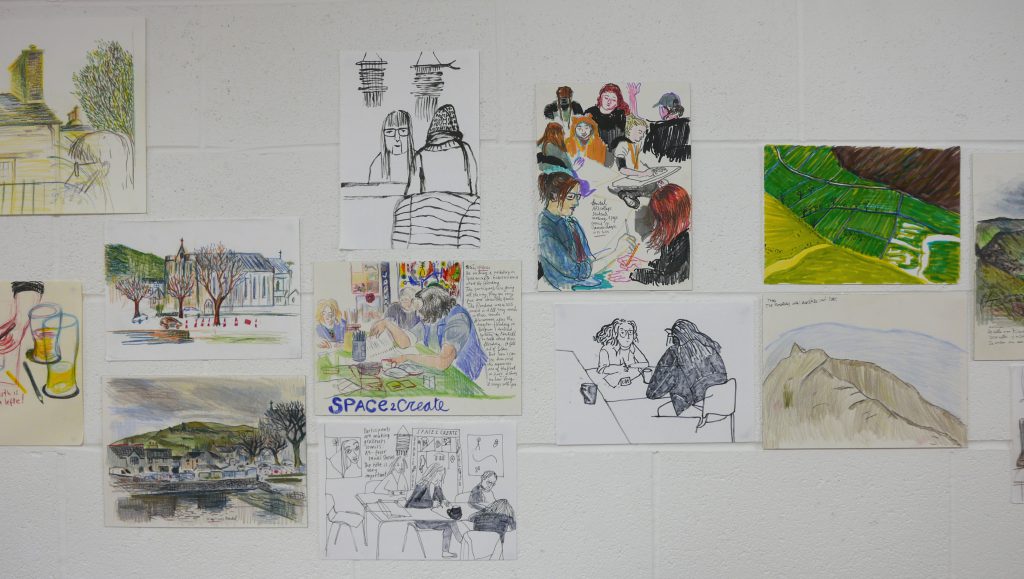 Judith Vanistendael, author of several graphic novels and drawn reportages, and Drawing the Times’ Eva Hilhorst are working on a longer project in which they research several ways of graphic storytelling around climate change. The starting point of the research is that personal stories make the abstract subject tangible.

In March they spend several weeks in Kendal in the Lake District in collaboration with LICAF, the Lakes International Comic Arts Festival. The town flooded in December 2015 as a result of the effects of storm Desmond. A lot of properties were damaged and it effected many people personally. Eva and Judith organised several meetings to hear and record those stories through drawing and writing. They organised workshops with art students and creative people in order to see which stories would emerge.

It was interesting to see that the people who didn’t have professional ambitions in drawing made very spontaneous and communicative comics, while some of the art students got in conflict with their inner critic.

Another way to collect stories was the ‘It’s like being at the hairdressers’ session. Eva and Judith drew people’s portrait in exchange for their story about the 2015 flood.

It is an effective and enjoyable way to collect stories: People feel that they are taken seriously, that the person drawing their portrait is really interested in their stories, and they receive something in exchange: a drawn portrait for them to keep.

The residency ended with an exhibition in Space2create in Kendal with all the drawings Eva and Judith made and the comics of the workshops. The people who shared their stories gathered for a drink and to exchange their impressions and experiences.

Chris Hogg, who was mayor at the time of the flood in 2015, said that he was a bit nervous to come and talk about his experiences, because they had affected him a lot and he was a bit reluctant to relive them. Afterwards he said it was actually a relief to talk about it and share his experiences with other people.

The next step in the proces will be the construction of a drawn story with all the information that was gathered in two weeks of the residency and see if the methodology that was used is a useful and valuable tool in making journalistic stories about climate change.

This story will be published on Drawing the Times.

The residency was made possible thanks to the support of the Embassy of the Netherlands in the United Kingdom and Flanders Literature.