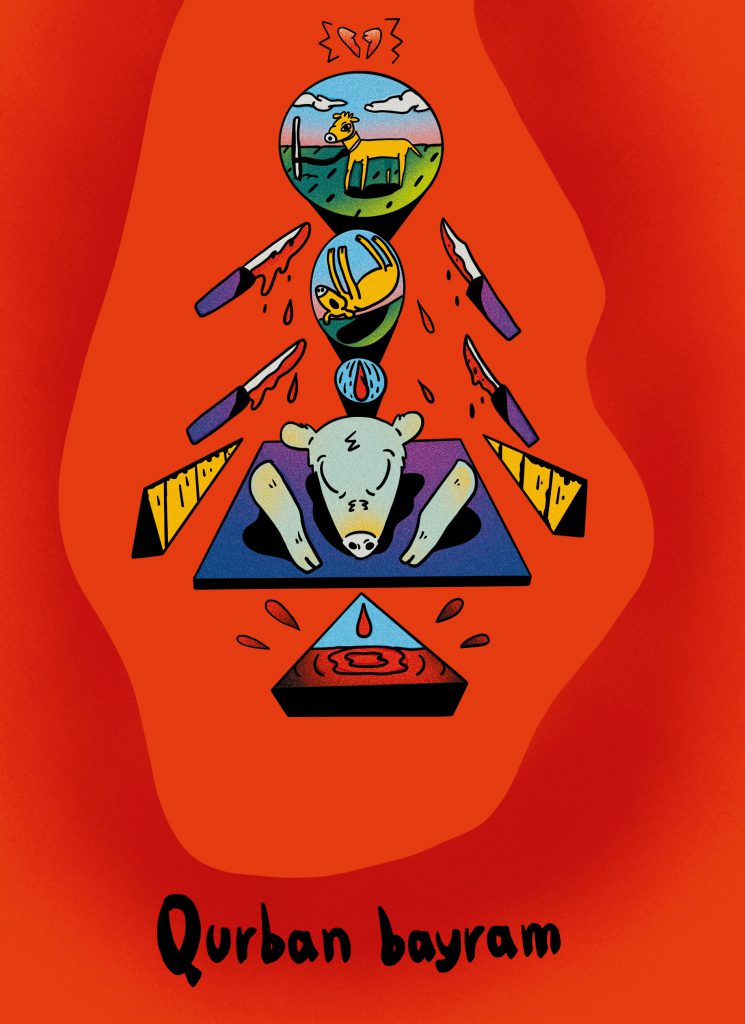 I remember exactly when I stopped eating meat. I was nineteen years old, lived with my parents, and commuted every day to a neighboring city for college. By the entrance to the school’s courtyard there was a crooked butcher’s stall. The pole where living calves were tied up was crooked, as was the table where meat was cut.  Every morning I passed the stall and saw a fettered calf, and every evening when I left, his head and legs would be lying on the ground.  The meat was chopped up, in bags, waiting for customers. The next morning there would be a new calf. It was like a deadly carousel. I tried to look away, but I didn’t always succeed. The calves had skinny legs with big heads and dark, tragic eyes. Every day I wanted to undo the ropes and take the calves home. I prepared for rebellion gradually, until one day I finally told my parents I was going to stop eating meat. But now that I’m thinking about it, I realize that I had made the first step towards this decision much earlier, at one of the Qurban bayram in my childhood.

One day my father brought a lamb along to our dacha and said that it was going to live with us. The lamb was cute and loved to eat grass. Papa showed me where I should pluck the grass and told me that I must make sure that the lamb always had clean water. He set up a pen for him near our house. I liked to stick my hand between the bars and stroke the lamb’s face while he chewed grass. He had curly wool and smelled familiar, like my grandmother who dried lambswool to make blankets and mattresses. We named him Tarzan.  He grew fast, bumped into everything and was unusually active.  One morning the whole family got together in the dacha. The women cooekd and chatted with each other in the kitchen, while I ran around the garden with the other children.

Suddenly I saw the men dragging Tarzan by his leg to an apricot tree, and we all went over to watch. Tarzan was knocked down. One of the men pushed him to the ground with his knee and another sliced his throat with a knife. There was blood everywhere, and the lamb’s legs jerked wildly. Afterwards everyone continued to enjoy the day, kept running and laughing as if what that had seen wasn’t terrible. My family explained to me that it had to be that way, that it was the lamb’s fate. I was surprised. I felt sorry for Tarzan, but at the same time I trusted what the adults were saying unconditionally. I asked my aunt to tell me why Tarzan’s destiny was to be slaughtered during the feast.  My aunt then told me about the Feast of Sacrifice, Qurban bayram.

What my aunt told me boiled down to this: the feast is celebrated in honour of the prophet Abraham. The Koran says that the angel Gabriel came to him in a dream and commanded him, in Allah’s name, to sacrifice his son Isaac. In preparation for the ceremony Abraham and his son went to Mecca, where the angel Gabriel, at the last minute, gave him a lamb to sacrifice instead of his son. To reward Abraham for his devotion, spiritual purity and willingness to sacrifice his son, Allah allowed Isaac to live.

When I was twelve, I decided to learn more about Islam. I started by reading about how I could celebrate Qurban. The more I read, the more disparity I saw between how we celebrate Qurban and what was written in the scriptures. Muslims prepare themselves in advance and fast for ten days. I did not see this being adhered to. The night before Qurban should be spend reciting namaaz. Only two of my family members did this. Qurban begins early in the morning. After a washing ceremony Muslims change into clean clothing and pray together in the mosque. There they read the Koran and listen to the Imam’s sermon, which explains the meaning and origin of the sacrificial ritual. No one in our family did this. The only thing that was always willingly obeyed was the sacrifice itself.

The meat of the sacrifice is divided up: the largest part is given to the poor, the second largest to relatives, and the smallest to immediate family. Since the sacrifice is made in the name of Allah, it must benefit those in need. Ritual charity for the poor, sadaya, protects the giver from misfortune and disease. What saddened me most was how the ritual of sacrifice had nothing to do with what was described in the Hadiths: “A good deed done to an animal is as meritorious as a good deed done to a human being, while an act of cruelty to an animal is as bad as an act of cruelty to a human being” Mishkat al-Masabih; Book 6, Chapter 7, 8:178). The Prophet Muhammad condemned the beating and branding of animals. The use of blunt knives and the slaughter of animals in front of other people are prohibited in Islam, although it is common in slaughterhouses today. The sacrifice of animals is now mainly about profit; people get rich from the sale of meat in large quantities. In some countries including Turkey and Azerbaijan, they sell skirts and ribbons for sheep so that the animals look festive before they are killed.

The truth is that Muslims are not supposed to kill an innocent animal in order to please Allah. Then why is the sacrifice so important in Islam? Let’s return to the context. The Koran speaks of animal sacrifice because people must sacrifice some of their limited means of survival with the poorer members of the community. At its core, ritual slaughter is not a blood atonement but an act of gratitude to God, by sharing our precious possessions and food with the underprivileged. The ritual itself isn’t about animal sacrifices – it’s about sharing the best of what you have. The act of animal sacrifice refers to the role that animals played in Arab society long ago.

People were instructed to give thanks and praise to God for the support He gives, by sacrificing something valuable of themselves and thus showing their appreciation for what they have been given. The lifestyle that Muslim vegetarians and vegans currently lead is closest to the traditions and rituals which the prophet Muhammad called for. I hope more and more people will share their way of eating. I myself have never celebrated Qurban bayram as an adult. This feast is inseparable from my family and childhood, and I had no particular reason to celebrate it after I left my homeland. But now that I know that it is not necessary to sacrifice animals to celebrate Qurban bayram, my attitude towards this tradition has become much warmer. Maybe I will celebrate it again next year, but in my own way.