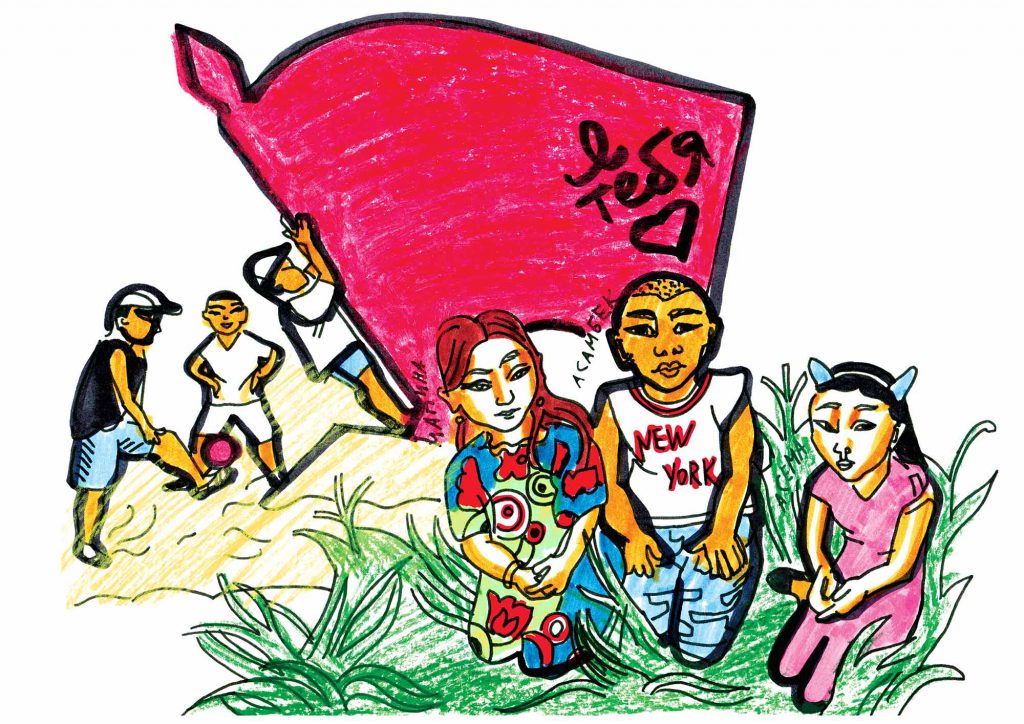 “It’s funny! What are you, a famous artist, doing in this tiny, apolitical, totally uninteresting town?” asked a friend of mine from Bishkek when he found out I had come to spend a month in Osh. In fact Osh is probably the second most important city in Kyrgyzstan, after the capital Bishkek. It is true, however, that it’s very small.

If anyone outside Kyrgyzstan has heard of Osh, it’s probably because of the bloody conflict between the Kyrgyz and the Uzbeks in 2010. Osh is on the border with Uzbekistan, and there are a lot of ethnic Uzbeks living in the region. All the people in Osh I asked about those events remembered horrifying details, but now the town looks quiet, and the people seem calm and relaxed. In the central town square there’s a memorial attesting to the conflict and its resolution: it shows two mothers embracing, a Kyrgyz and an Uzbek women, over a cradle with the names of those who were killed.

The Kyrgyz I met described their society as worldly and receptive to outside influences, while the Uzbeks were proud to call theirs closed-off, traditional, and religious. “It seems to me Osh is only alive thanks to the Uzbeks. They get up at five in the morning, sweep the streets, and go to work at the bazar. Whereas the Kyrgyz wake up at nine and go to the office, where all they do is corruption,” in the judgment of my Kyrgyz friend.

I came to Osh to give a master class on feminist stenciling for a youth organization called New Rhythm. The class was attended by very young girls, and only one of them was Uzbek. Her name was Madina. Madina made a stencil about child marriage in Uzbek families, and she told us her parents insist it’s time for her to get married. “Only my grandmothers want me to keep studying,” she said, “and they’re overjoyed when I wear short dresses.” The other girls in the class confirmed that Soviet-era grandmothers are often the most progressive members of the family: they encourage their granddaughters to learn languages and travel the world.

“Your neighbors won’t judge you anymore!”

Kyrgyz and Uzbek children play together at the playground, but the girls in my class didn’t have any Uzbek friends. Their lives are just too different; many Uzbek girls are kept at home from the age of 12–13—the moment they start menstruating. If you see girls in Osh wearing shorts and with short haircuts, you can be sure they’re Kyrgyz, whereas the girls and women in robes and hijabs will most likely turn out to be Uzbek.

There were other volunteers besides me leading classes at New Rhythm. They were all Europeans from Western organizations that support New Rhythm. Most Kyrgyz NGOs in the fields of education, culture, and human rights depend on Western grants. The organizers I worked with at New Rhythm counted no fewer than 15 human-rights organizations active in Osh. In 2014 Kyrgyzstan considered legislation copied from the 2012 Russian law concerning “foreign agents.” According to this law, NGOs receiving support from abroad have to register as foreign agents. In Russia organizations that get added to this list are constantly investigated and fined; it becomes too difficult for foreign donors to work with them, and ordinary citizens, far removed from politics, think the foreign agents are dangerous spies. In Kyrgyzstan the law was not passed.

I attended some lectures by the European volunteers, who talked about HIV in Kyrgyzstan, activism, and sex education. The lectures were in English, which progressive Kyrgyz young people are actively studying.

Russia contributes no money to the development of civil society in Kyrgyzstan. My trip was paid for by a European foundation.

Osh, one of the most ancient cities in Central Asia, was part of the Khanate of Kokand. In 1876, after many years of colonial war, the Khanate was annexed to the Russian Empire. The Kyrgyz in the Alai mountains continued to resist the “white tsar” for some time under the leadership of their ruler Kurmanjan Datka, but they were outnumbered, and Kurmanjan Datka was forced to acquiesce to the annexation of the Alai region by Russia. A monument to her, the legendary “Queen of Alai,” stands on Osh’s central street.

Together with the Russian army traveled the artist Vasily Vereshchagin, who might be called the first Russian Orientalist painter. Vereshchagin sketched battles, local architecture, and scenes from the daily life of the native population, but when they rose up against their occupiers, he took up arms and actively participated in suppressing the rebellion. “I remember, I then shot two of the attackers, and did it methodically, if you can put it like this—in a professorial way,” he recalled in his book At War in Europe and in Asia. Vereshchagin simultaneously attracted me with his fearlessness and talent and repelled me by his willing involvement in that war. Hoping to find something having to do with his paintings, I set off for the Osh historical-archaeological museum, but I didn’t find anything.

In 1991, when the Soviet Union dissolved, the Soviet Republic of Kyrgyzstan became the independent nation of Kyrgyzstan. Unlike in many other former Soviet republics, in Kyrgyzstan they’ve made no effort to do away with Soviet symbols or monuments.

Outside the mayor’s office on the main square there’s a giant monument to Lenin; it hasn’t been taken down. But at night Lenin disappears in the dark—the lights are set up to illuminate only the mayor’s office with its enormous national flag. Inhabitants of the city have different ideas about why Lenin has been left in place. “It’s because Lenin is our father. He brought us education,” some say. “It’s not like some tree you can just cut down. To take it down would cost a huge amount of money,” others add. A less-well-off country doesn’t have the means to systematically destroy its symbols of Soviet power the way it was done in the Baltics, Georgia, and Ukraine. Besides, a majority of the Kyrgyz remain loyal to the Soviet legacy.

The kids playing on the square knew who the statue was. “That’s Lenin, he’s some Russian hero,” they said.

There’s a Communist Party headquarters in Osh, located on Lenin Street. Some elderly local communists were happy to talk with me. “In Kyrgyzstan a majority of people voted to preserve the Soviet Union,” they said: “The Russians believed in Lenin like a God, but we took only the very best of the Communist Party, and we have no intention to forget it.”

Most of the foundations of the Communist Party come straight from the Koran.

In Soviet times many people came to Central Asia to live and work: architects, builders, engineers, agronomists, teachers, doctors, and artists. Some were sent here for work and had to come, while others wanted to move here for their own reasons. After the fall of the USSR the Russians started returning to Russia, and now only a few Russian families are left in Osh. I visited with one such family: the husband, a geologist, said he wouldn’t leave for anything, while his wife, a former schoolteacher, dreamed of leaving; their children had long since moved away.

None of the Russians with whom I spoke complained of any discrimination. Though they’ve spent the better part of their lives in Kyrgyzstan, they don’t know a word of Kyrgyz, but it’s not a problem because Russian is the country’s second official language, with its status enshrined in the constitution. The main reason for leaving is unemployment in Osh.

Almost every family in Osh has had someone leave to find work in Russia. A majority of the migrants working in Moscow as janitors, taxi drivers, and in construction are Kyrgyz or Uzbeks. Most often Muscovites treat them with scorn. Even in those rare cases when real contact arises, a Muscovite is unlikely to want to learn anything about Central Asian culture—they prefer to think of Kyrgyzstan as a wild and exotic place.

One of my new acquaintances in Osh told me he worked in Moscow for a long time in the Magnolia chain of grocery stores: “When I was about to leave for home, one of my coworkers at the store said, ‘You should bring some Coca-Cola with you, let your people give it a try.’ I had told him about Kyrgyzstan, but I guess he was just thinking his own thoughts the whole time: ‘Do you guys have paved roads?’ ‘Do you guys have laws or do you just start shooting each other?’”

In Russia people with Asiatic features are frequently subject not only to scorn, but also to physical attacks. Another man I met in Osh, an Uzbek named Anvar, told me he had witnessed such an attack in the Moscow Metro: “At a station where there were police, some skinheads got on a train with a lot of non-Russians in it. A fight broke out, and the police didn’t do anything.” “We’re part of the Russian world. I think in Russian. I say to my friends, ‘The Crimea is ours! Soon the Donbass will be too!’ Just like the French, you have to accept the results of your colonialism,” Anvar said.

The locals I happened to meet in Osh were very generous and frequently treated me like an honored guest. For example, the owner of one chaikhana [a café in Central Asia serving tea, etc.—JM], when he found out I was a Russian from Moscow, insisted that I be brought a plate of celebratory plov [a Central Asian dish of rice and meat—JM] and sweets, all on the house. The whole time I was drawing Bakhtiar’s portrait, he was singing Russia’s praises, and I felt like some kind of Orientalist artist.

The whole time I was living in Osh, nothing happened in the city, not a single event. I just walked the streets, with their signs that began in Russian, continued in Kyrgyz, and ended in English, talked with the young feminists from New Rhythm, and drew pictures at the bazar of women in hijabs under Pepsi-Cola umbrellas. People in the city started saying hi to me: “We saw you drawing in the park. Where are you from? Come visit us!”

On my last day there, the New Rhythm feminists decided to take me to the sacred mountain Sulayman-Too (King Solomon’s Throne), which stands prominently in the middle of the city. According to local legend, Zoroaster created his teachings in a cave on this mountain.

It’s impossible to climb the scorching Sulayman in the heat of the day, so we went in the early morning. A crowd of pilgrims had already gathered at the foot of the mountain. I was starting to draw a group of them when a girl wrapped up in something long and black came up to me and said she wanted to be in my drawing. “She must be an Uzbek from a religious family,” I thought. Just then the wind unexpectedly lifted the hem of her dress, and I saw she was wearing high platform sneakers covered with pink sparkles. In the background I caught sight of some guy who was clearly waiting for her. “We’ve been hanging out here all night,” said the girl. “Is that your husband?” “That’s my lover,” she answered, laughing.