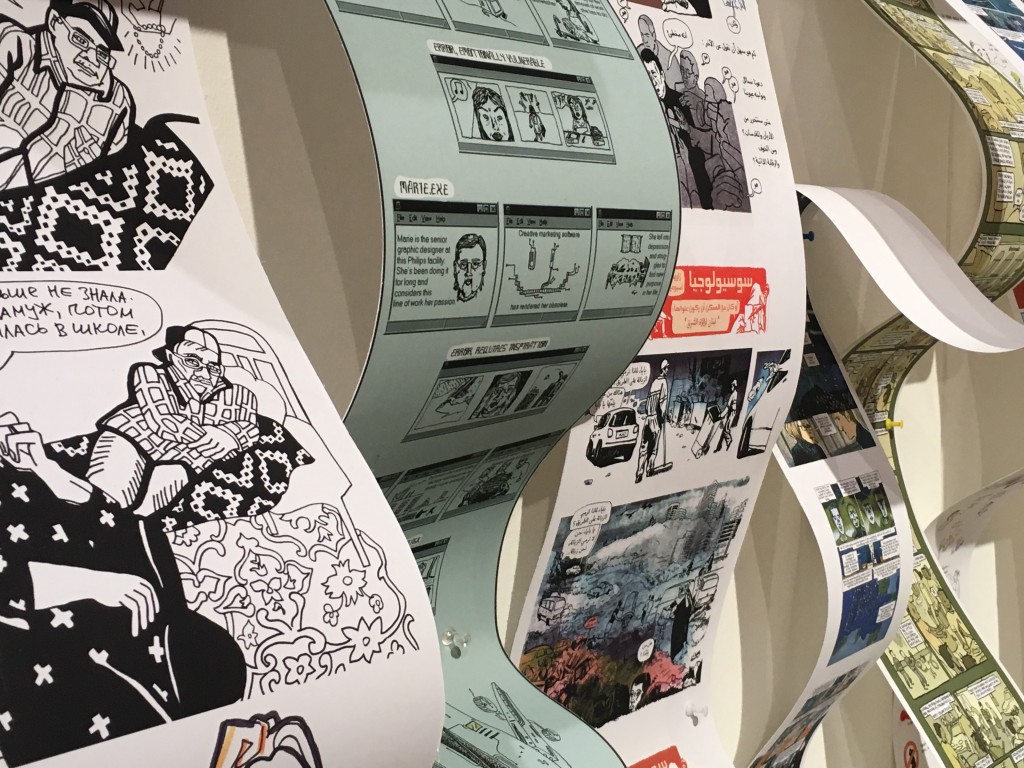 A record amount of visitors at Dutch Design Week in Eindhoven this year: 335,000. This was a great opportunity for Drawing the Times to show what we have to offer: 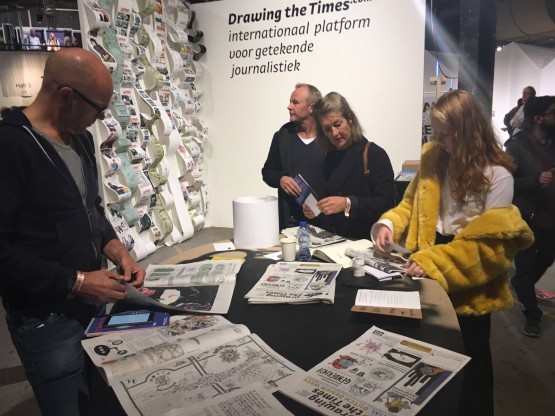 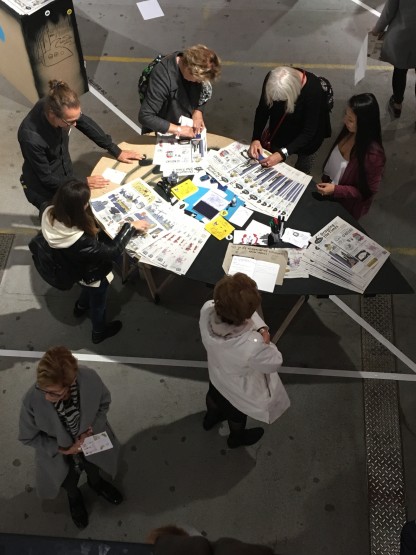 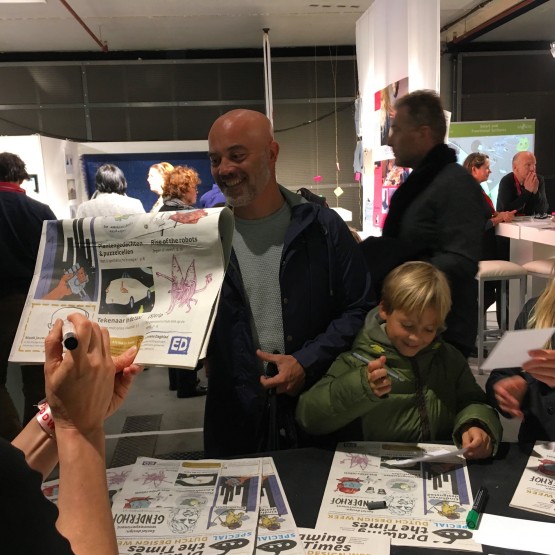 Sanne Dijkstra personalizes this visitor’s free issue of the drawn newspaper we made. 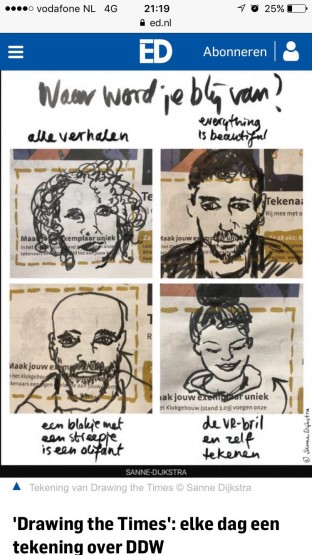 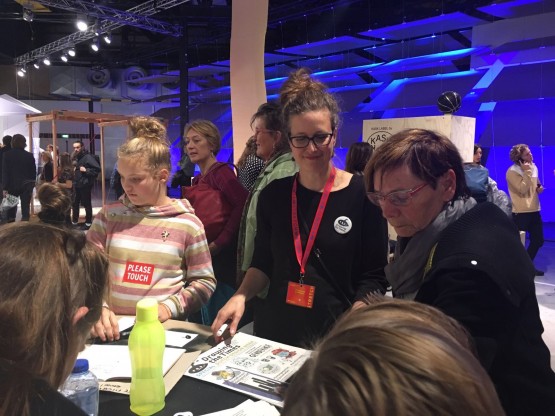 On the balcony Drawing the Times Lab was in full action, a collective of illustrators was working full time : 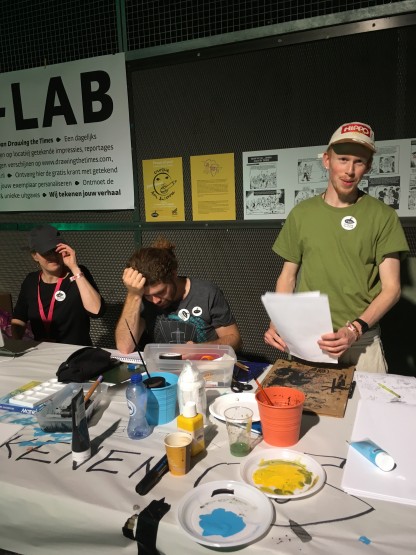 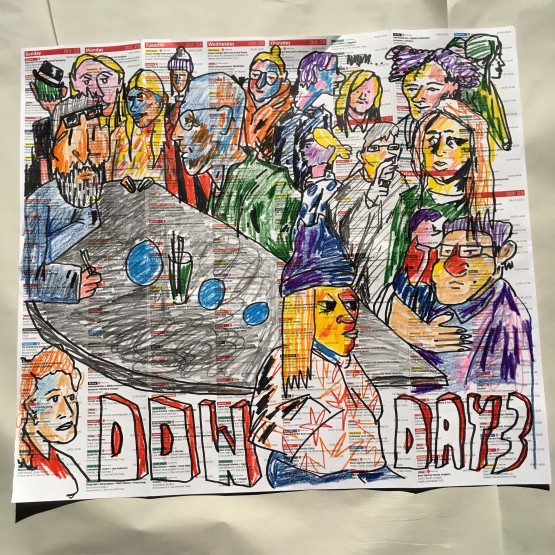 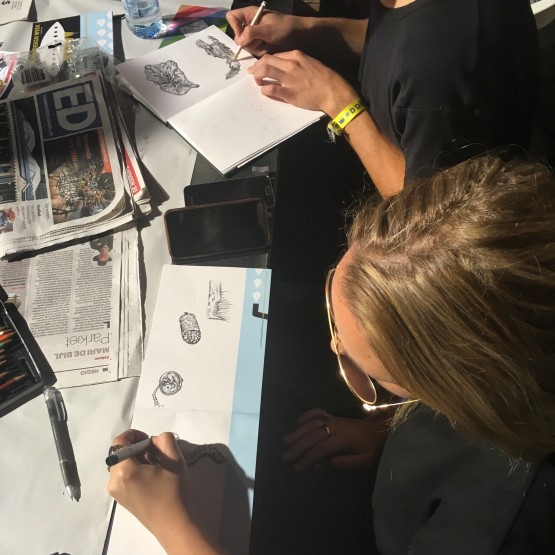 Jaël Buys and Niels Sinke working on an illustration for ED. 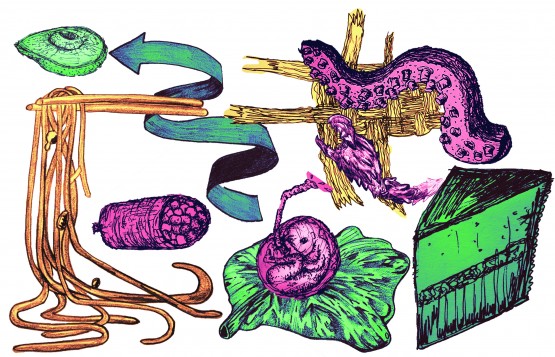 Everyday we published an illustration in the Eindhovens Dagblad. On Thursday we even had two, one by Phi-Yen Phan and one by Saskia Janssen: 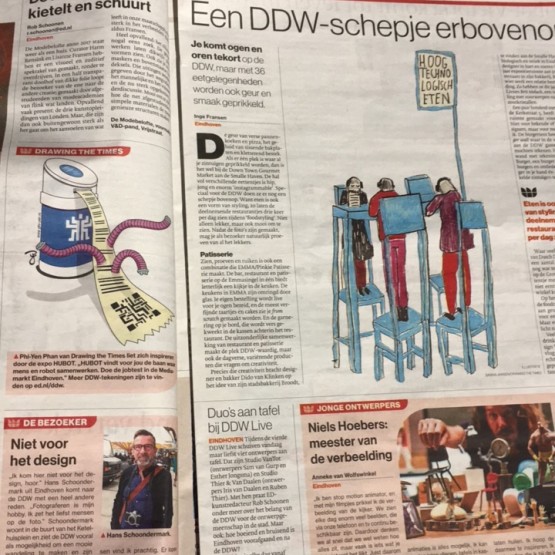 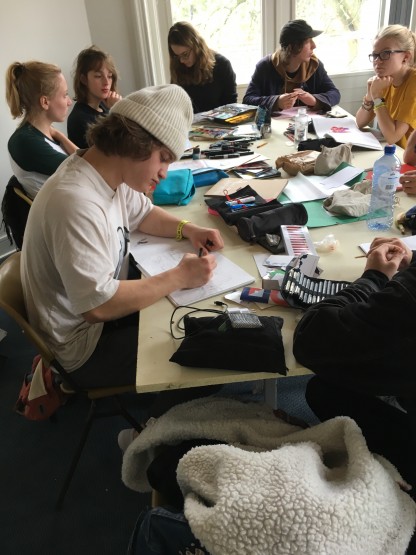 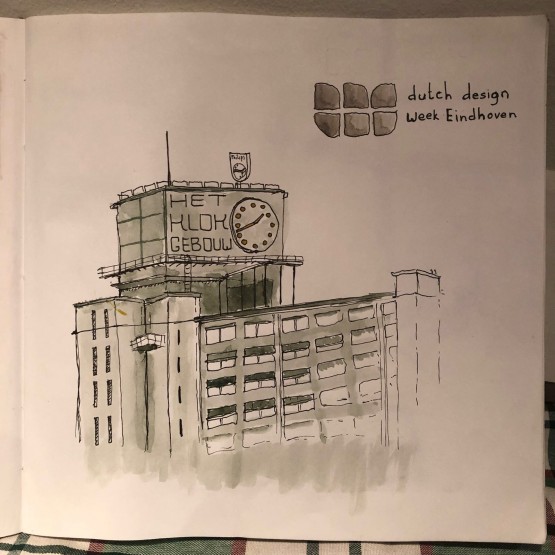 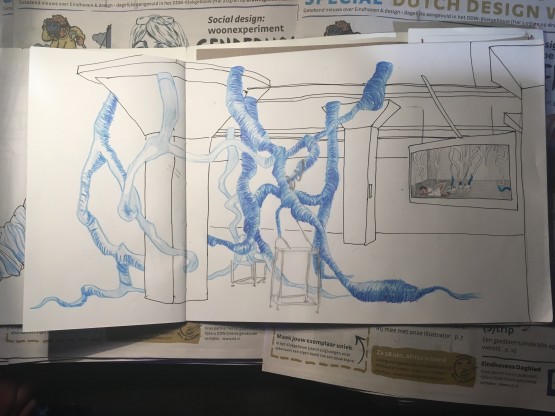 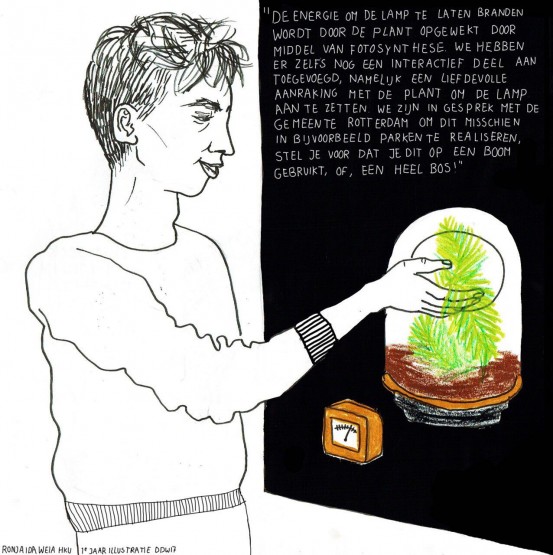 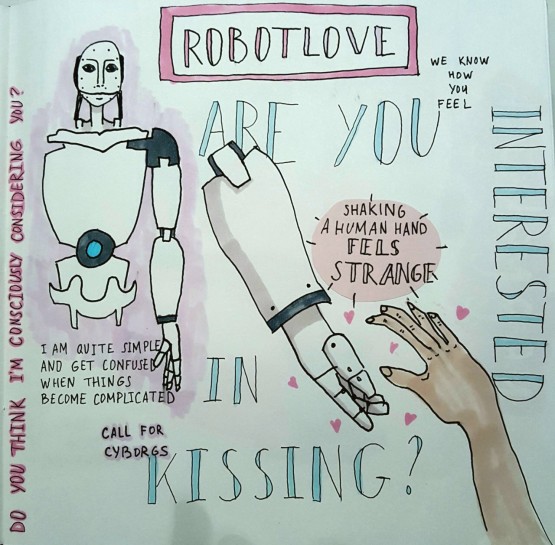 They made an exhibition that can be visited at the Albert van Abbehuis until November 10. 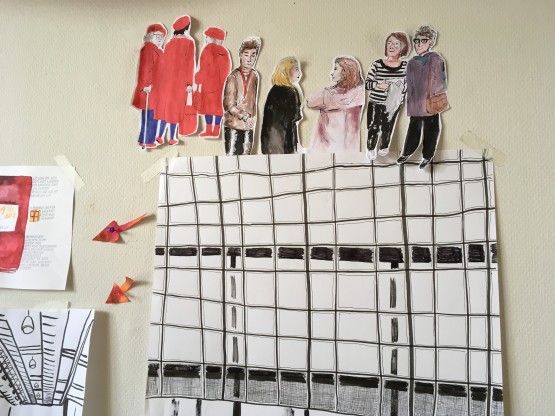 We even had our own taxi driving around in Eindhoven, with drawing driver Niels Egidius: 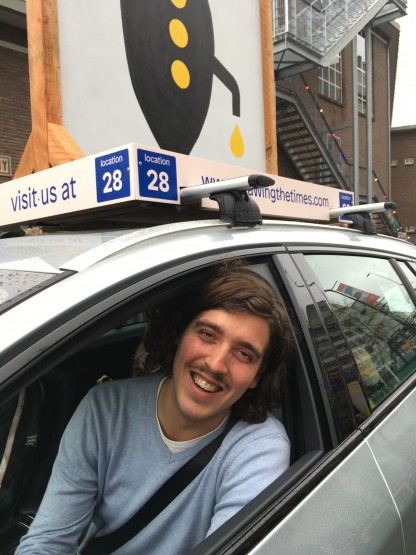 With the submarine turned into a rocketship! 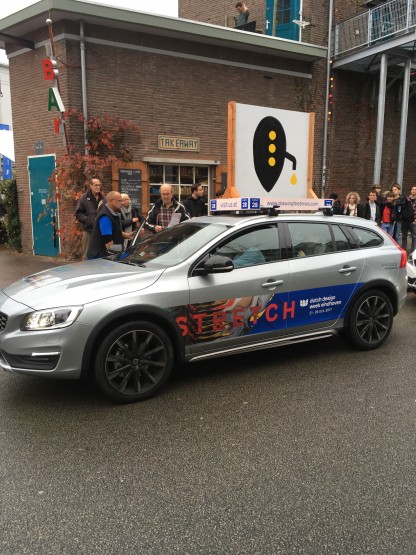 On Saturday Barbara Rottiers and Eva Hilhorst gave a lecture about Croque ton histoire in the People’s Pavilion: 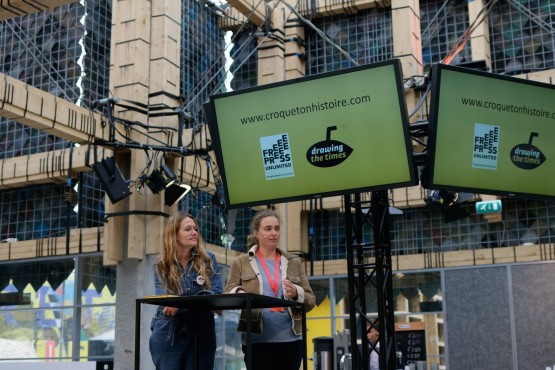 That again was turned into a visual report by Judith de Haan: 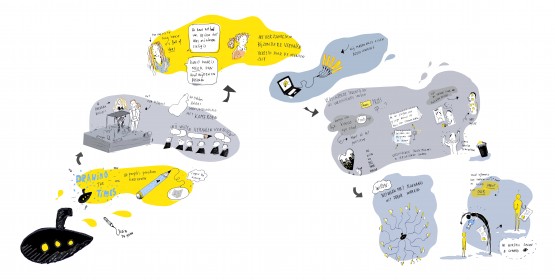 We made ‘live’ connections with illustrators in Burundi and Cameroon: 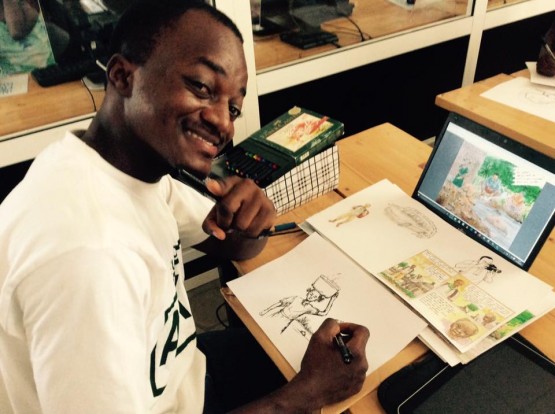 Dutch Design Week 2017 was an unforgettable experience for all of us, and it could only be made possible because of the incredible efforts and support of everyone involved, with a special thanks to Albert Hennipman, Mark Schalken, Sanne Dijkstra, Merel Barends, Laura van Bokhoven, Jaël Buys, Lydia de Zwart, Aiden Wong en Niels Egidius. 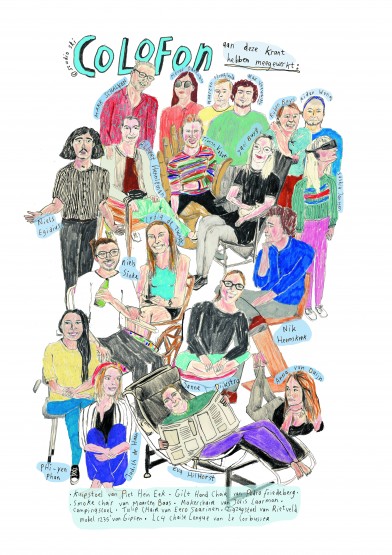 Illustration made by Saskia Janssen of all the people that have worked on the special Dutch Design Week newspaper.

Soon on www.drawingthetimes.com: Dutch Design Week 2017 – the actual drawings, a selection of drawings made during DDW2017 by talented young illustrators and artists!