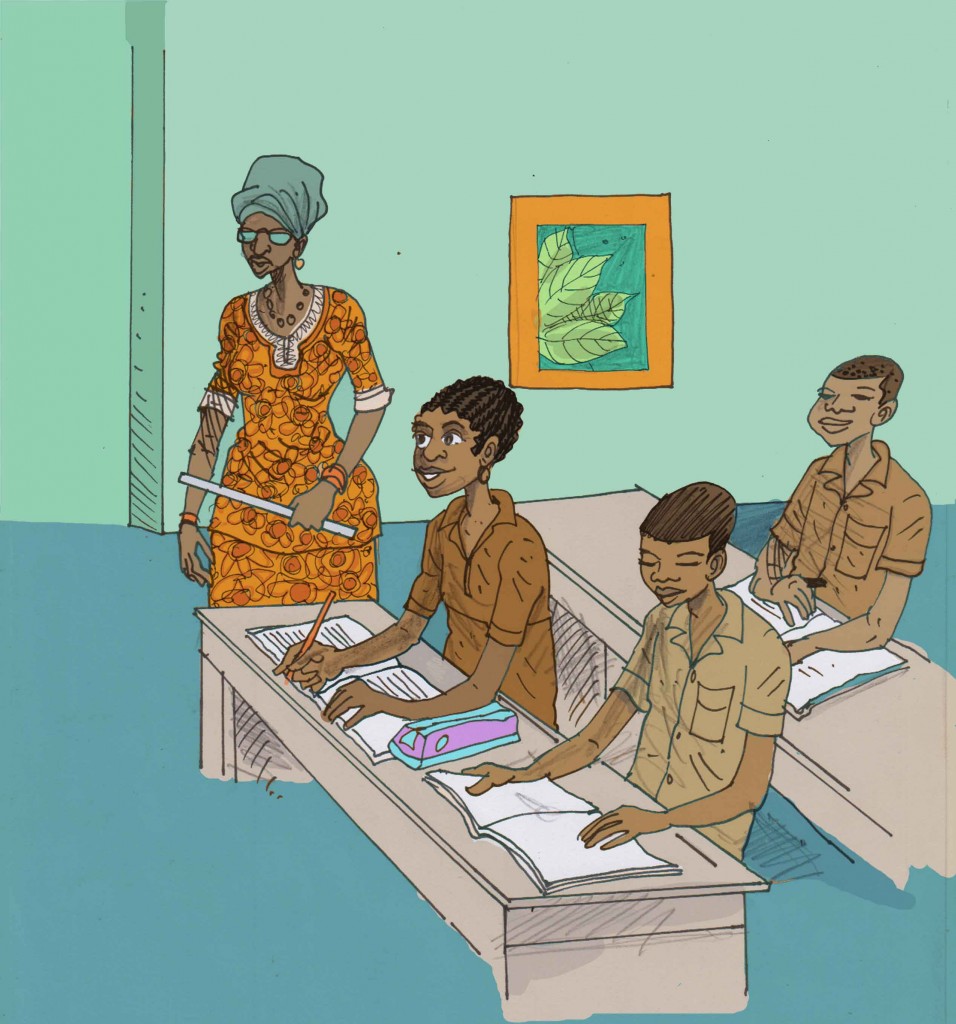 In 2010 Glwadys Aguegue, Hermine Akponna and Hilde Baele started the NGO CàNous in Cotonou, Bénin. CàNous is active in the field of children’s rights, they want to give children and adolescents a voice. When children are able to share their experiences, they are no longer alone with their problem. The NGO gives information about children’s rights so the children can ‘arm’ themselves against abuse, rape and trafficking. They share their information with audiovisual media. For example, they translated a part of the penal code in a language that children can understand, and it is used to battle injustices. In 2012 CàNous received the ‘Human Rights Prize’ in Bénin for their original ways of communication.

She pulls the baby on her back, grabs the cloth, wraps it around her waist, crosses the flaps and ties the knot. Her little daughter is comfortably nestled. The mama makes a few turns around the bench. Little Anifath dozes off. Amirath takes a seat. I listen to hear. She wants to be heard. 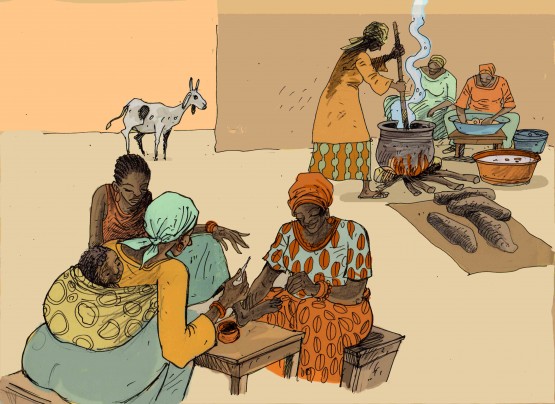 ‘I’d rather sit on the school bench than on a kitchen bench.’

‘I was twelve years old. Dad waited for me after school. He had something important to say to me. He ordered mom to come closer. “I decided to give you in marriage. I just gave your hand in marriage to mister Ibrahim. You are quitting school.”

His words caused a detonation of an explosive charge. An outburst of screams, cries, of tears broke the calm of the house. Anger, fury, fuss, storm, noise. Mom and I were desperate. “Our daughter is only twelve years old! She is too young for a marriage. She is going to school.” But my father didn’t want to listen at all. “It is my decision and you just have to do as I say. I already accepted the dowry of your future husband. It is unthinkable to take a step back.”

“And my dream to become a pharmacist? I am a good student, I have other plans for the future!”

“You will marry Ibrahim!”‘

‘I could have never imagined myself married to Ibrahim. At home we called him fondly Fofo, that means big brother in Fon language.

My brothers and I, we saw him as a big brother. Before he traveled to Saudi Arabia to make a fortune he came to Bénin to find work. He is from Kotokoli, a village in Togo. My father kind of adopted him, because he was far away from his parents. He sent us presents sometimes from Saudi Arabia. He is 28 years old, double my young age.’ 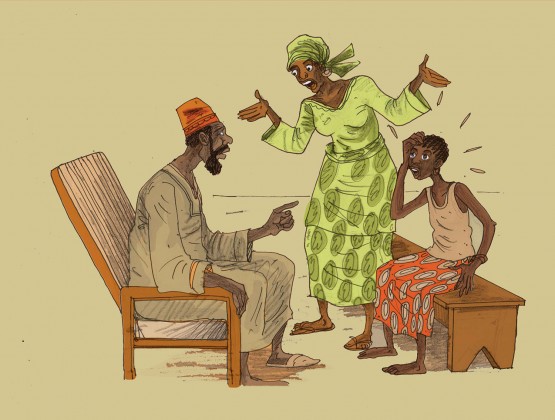 ‘For my mother, my father’s decision was unacceptable and unfair. Mom strongly opposed to it. My father was furious. After a few months, the family turned against her. One doesn’t dispute the decision of the husband. My father left her. She was isolated. He would not come back until mom accepted the marriage.

Mom held her head up high for two years. Tired and abandoned by all, she broke down and accepted my father’s decision crying. She begged me to oblige. We broke down and cried.’

The wedding day, a wedding without husband. 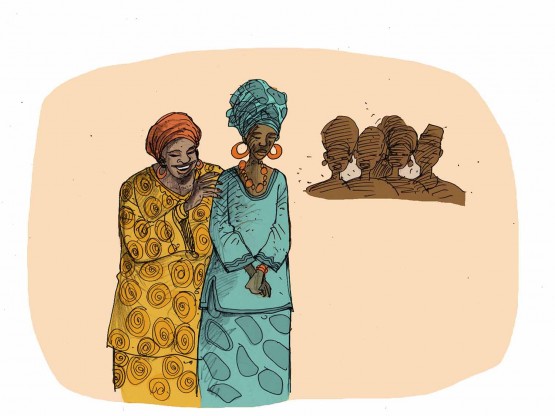 ‘July 2013. Damned day! I was a 14-year-old child. I finished the school year first in class. I had to exchange my school uniform for a wedding gown. It was so unfair. I was thinking of making a complaint at the Brigade for Protection of Minors, but my friend discouraged me. “You will do your father wrong. He will renounce you. You will be alone and without family.”

The preparations started the day before. The whole family came. While one group of women was preparing the condiments for the meal, another group decorated my feet and hands with lali (a plant that gives a red colour).

The next day they did my make-up. They dressed me. It was a muslim wedding. It was a wedding without a husband. Ibrahim is still in Saudi Arabia. Our parents represented us at the mosque.

A large gazebo was set up in the yard. Speakers played music. I didn’t see anything, I cried. The women changed my cloths several times. They refreshed my make-up. I had to walk around and greet the family. People threw money at me. They glued banknotes on my forehead. Traditions, traditions. I wept. Smeared make-up made traces on my face. My aunt wiped it off. She applied make-up again. I saw my mom in the distance. She was sad too.’

‘What a pain. Heartbreaking departure. I left for Togo with one of my sisters-in-law. I lived with her until my husband would come back from Saudi Arabia. I dreaded his homecoming. I was scared of him and of what would happen to me in the first nights. 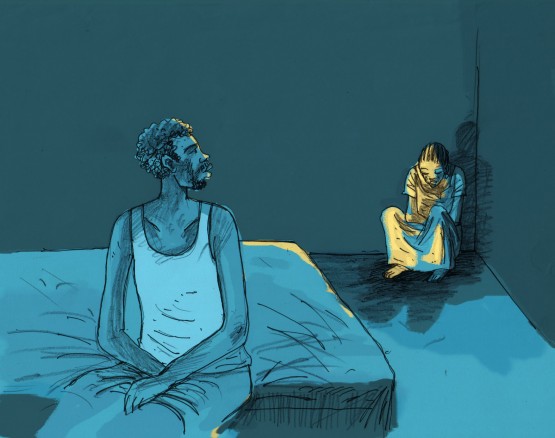 He approached me. He wanted to have sex with me. I could defend myself for some hours and refused to have contact. But not for long… One night, he had become impatient, he raped me and I lost virginity. It hurt very VERY much. I cried a lot. The same thing happened night after night until I submitted and knew how to handle my pain.

We moved to the house of the in-laws. Ibrahim wasn’t making a fortune and couldn’t pay the rent for the apartment. We moved in with his parents and his six little brothers and sisters.

I was forced to do domestic work. And I had to help my mother-in-law in her business. I missed my mother. I suffered. Here, nobody loved me. The family wasn’t kind to me.’ 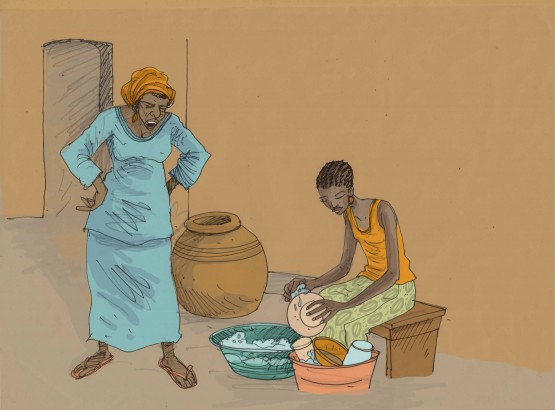 ‘My young belly didn’t carry a baby. The in-laws put pressure on me to get pregnant. For them it was a shame, a scandal that the wedding wasn’t followed by a pregnancy.

But finally, my belly blew up…

My mother-in-law was the first one to notice: “Did you have your period?”

We went to the hospital to discover the first pregnancy. When we came back, I was entitled to  congratulations from everyone, including my husband. But most of all I am happy that I got rid of the label they gave me of being incapable… But the insults remained.

The first months I was sick. I was nauseous and I vomited. I couldn’t eat. I was very tired.’

How to give birth

‘How to give birth?, I had no idea how to do that. Nobody talked to me about it. Nobody explained from where and how the baby would see the light. The in-laws just answered that a delivery always went well and fast and without pain.

But it was the contrary……. 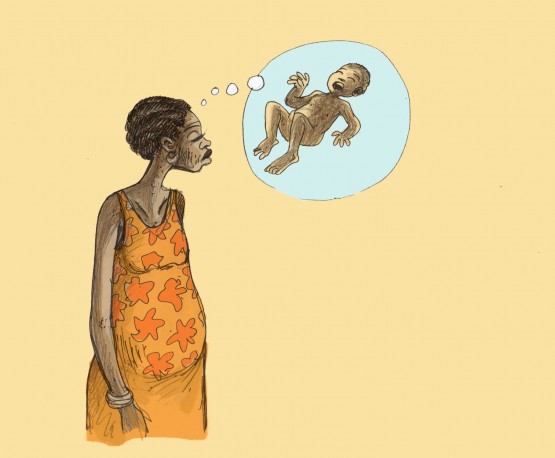 One night, I had pain in my stomach. It felt like a rubber band that was stretched and released and hurt. I informed my mother-in-law. “It is too early to go to the hospital. We will have to stay there too long.”

I was in pain the whole night. I had to pee, but my mother-in-law didn’t let me go to the toilet. “You have to pee in a pot in front of me!” she said. I obeyed.

The sun went up. My mother-in-law put me on a motorbike. We left for the hospital. The trip is tough, painful. When we arrived, a man in a jacket ordered me to lay down. He touched me on the inside. I felt a warm liquid flow between my legs. I was all wet. The man in the jacket gave me a cloth to cover my breast and I changed rooms. The pain intensified. It hurt, hurt, hurt! I wanted my mom! I wanted my mom!

There were five women in the room. I screamed, cried, howled “Mom, I want to die!” But the midwife stayed in her chair and insulted me: “Did they ask you anything when you had your moment of pleasure? Did you cry then? Well? So shut up!”. The other women in the room were not sweet with me either. I only had the right to insults. A delivery always goes well and fast and without pain, my mother-in-law said…

For hours and hours I was laying on that table. I was tired, exhausted and alone with my pain. “Push! Push!! Puuuuuuuuush!” said the midwife. Who, what, how do I push? “Come on, puuuuuuuuush!” The desire to push came by itself. I didn’t know how long I was pushing, but I could feel the birth coming close. Am I too small to deliver a baby? I pushed and pushed and pushed. Finally the terrible pain stopped, my daughter was born.

When I woke up, I was in a different room with other young mothers. The nurse gave me my daughter and I put her on my breast. “Give milk!” I couldn’t do it. There was no milk. The baby cried. The baby got glucose serum to calm down.’

‘The next day I went back home. Down in my belly it hurt, but most of all in my intimate parts… I couldn’t sit down. I couldn’t walk. My mother-in-law heated water. I had to sit over a basin full of hot water. Mother-in-law washed me, she washed me like a baby. She massaged me. She touched me everywhere. I howled in pain. She examined my intimate parts. “It is all torn apart because of the delivery!” She repeated her shock treatment the days after. I was tired. When I walked, I had the impression everything tore again.

My mother-in-law had no mercy. I had to help her in the kitchen. I had to wash sheets and cloths. I didn’t sleep at night because the baby was crying and I tried to nurse her. I missed my mom. She would have had more compassion, a heart.’

At the same time Ibrahim…

‘After Anifath’s birth, I didn’t have problems with Ibrahim. There was a child.

But I wonder if I love my husband. I believe I am still lucky because he is taking care of me. A few weeks ago Ibrahim left for Qatar to earn some money. He is driver and works in a carpet laundry. He encourages me to put up with his parents. He asks me to be patient until he finds enough money to move out.

But I have a new love with me, Anifath.’ 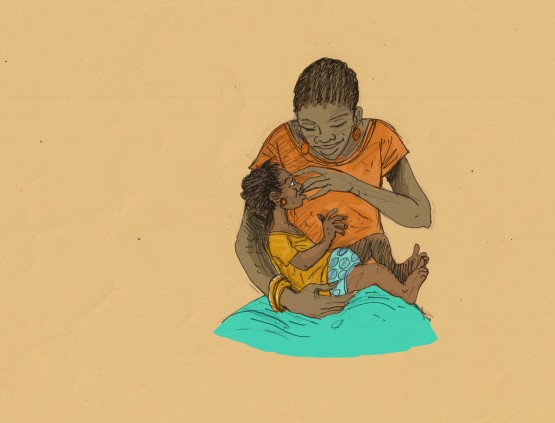 Today, Amirath is 17 years old, almost 18. Anifath is almost one.

Amirath got permission to leave and visit her parents in Bénin. I a few days she will leave and wait for her husband to come back. Amirath wants to stay close to her mom. She wants to take the advantage to follow an education as a shop assistant in a pharmacy. While her husband will have other women, she wants to be as independent as possible to be able to take care of her daughter. Amirath doesn’t want to get pregnant again and wants to use birth control to avoid pregnancy. She wants to choose a contraceptive.

‘I didn’t come to pity myself. I came to ask parents not to sell their children as merchandise. Daughters are a treasure to keep for a longtime. And one day, you will give her hand in marriage to her loved one. And everyone will be happy.’