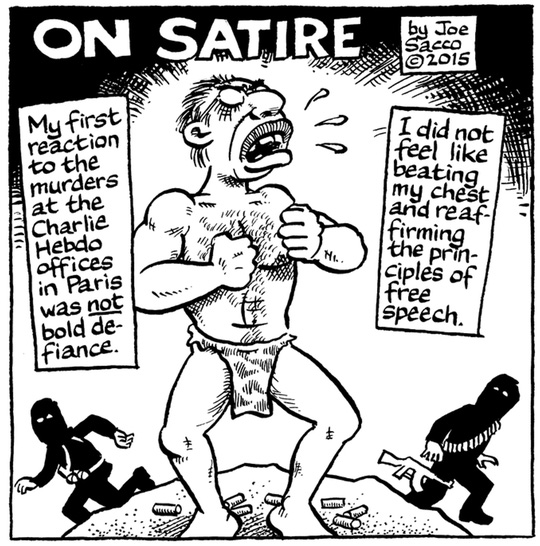 There’s not an editorial writer in the world who did not comment on the Charlie Hebdo murders, on the freedom of speech, or on the responsibility of cartoonists: how far can or should they go? Millions of words have been written about the images that have been fluttering around the globe since the 30th of September 2005, when the Danish journal Jyllands-Posten published twelve cartoons depicting the Prophet Mohammed. But at least as revealing are the ways in which cartoonists themselves responded: how do they view the complexities of criticizing Islam, and how do they present their opinions?

On the 7th of January Cherif and Said Kouachi murdered the cartoonists Charb, Cabu, Wolinski and Tignous, and for a short while, the whole western world was ‘Charlie Hebdo.’ Only a short while, as the French comedian Dieudonné was quickly silenced because of his provocations, which immediately proved how difficult it is to deal with the freedom of speech. Joe Sacco, the American comics journalist, focused on that complexity in his drawn commentary, On Satire – a response to the Charlie Hebdo attacks, which was published on the 9th of January (thus two days after the attack) at theguardian.com. In the first panel he depicts himself as a Neanderthal wearing a skirt made of fur and beating his naked chest, but next to it he writes: “I did not feel like beating my chest and reaffirming the principles of free speech.” He thinks it is rather primitive to join the general outcry without first examining precisely what is going on. “Tweaking the noses of Muslims” is perhaps permitted, he ponders, although it is “a vapid way to use the pen”. Nowadays, however, we have the right to offend and Sacco shows his readers that he understands how this works. So he draws a black man as an ape and a Jew as an exploiter, not too difficult. Then he asks: “But perhaps when we tire of holding up our middle finger we can think about why the world is the way it is… And what it is about Muslims in this time and place that makes them unable to laugh at a mere image.[…] Let us drive them from their homes and into the sea, because that is going to be far easier than sorting out how we fit into each other’s worlds.” Sacco adds an iconic image: the prisoner from Abu Ghraib, standing on a pedestal with a hood over his head. With this drawing Sacco suggests that it is not a Jew but a Muslim who is being crucified.

It is interesting to study the reactions of other leading figures in the comics and cartoon industry. In 2010 the Swiss comics journalist Patrick Chappatte spoke at a TED conference about ‘The Power of Cartoons’. This was five years before the Parisian attack, but the stance Chappatte took is similar to that of Sacco: “We know that cartoons can be used as weapons. They are a great means of communication, for bad and for good! I believe that the cartoonist – in any context, anywhere and always – has the choice NOT to do a cartoon that will feed hatred. […] Cartoonists need our support for their ethical, critical and responsible voices.” In 2006, Plantu, the famous editorial cartoonist of Le Monde, launched the organization Cartooning for Peace/Dessins pour la paix in the United Nations building in New York (very symbolical). In his keynote speech on that occasion, Kofi Annan said: “Cartoons make us laugh. Without them, our lives would be much sadder. But they are no laughing matter: they have the power to inform, and also to offend.” And here we see the huge dilemma for each and every cartoonist: one wants to be critical, but without inciting violence. When should one cross the line?

In just ten drawings Sacco distanced himself from moral laziness and nuanced the boundlessness of the freedom of speech. It did not take him long to meditate on this aberrant opinion, and that is partly because he is an American and did not grow up in ‘our’ tough satirical tradition. J.J. McCullough, also drew a small essay, which was published on the 14th of January at thenib.com: Satire Is Dead. And Cartoonists Killed It. McCullough says that the satirical genre Charlie Hebdo specializes in is difficult to grasp for Americans and is therefore “so furiously misunderstood”. In the United States political correctness rules and everyone is supposed to apologize for even the smallest offence. In Europe however, he states, it is permitted to offend for the sake of offending. “The point is simply to prick polite sensibilities”. Wherever you stand in the political spectrum, you may be ridiculed, even if you are a Muslim. Leftist intellectuals in the States can be horrifyingly nuanced, writes McCullough, alongside a cartoon where a timid American tells an outraged Koran-reader: “I too found the cartoons racist.”

Whether he thinks that Sacco too is a politically correct liberal remains unclear, but McCullough is as appalled by clichés as his colleague and thinks that statements such as ‘the pen is mightier than the sword’ are absolute nonsense. He draws a map of a hostile territory that is attacked from the air with pencil stubs: a futile effort. His sobering conclusion is that the international cartoon war is a hopeless exaggeration. “A moment like now is a good opportunity to be honest about what satire actually is – namely, something a great deal less important than both enemy and supporter alike often suggest.”

Here McCullough seems to be confusing two different things: satire can be futile in the prevention of problems, but is arguably brilliant in causing them, which is why he drew his comic in the first place. The Spanish satirical magazine Orgully i Satisfacción also dealt with the Parisian events: Homenaje a Charlie Hebdo contains contributions from several cartoonists, including Mel, who designed a mini-essay about five ‘sophisticated’ ways to respond to the chiste ofensivo, the offending joke:

Albert Monteys made a comic that renders a range of responses to the killing of unpopular cartoonists. For example, he draws Marine le Pen of the Front National who shouts that the death penalty should be restored. Two terrorists looking at her with admiration say: “What a woman! Is she one of ours?” A publisher is quoted saying that his newspaper will not tolerate images of Mohammed because they would insult people in a gratuit manner, and several other examples of opportunism are shown. The title of this collection: ‘How to dodge respect for the dead’. Orgully i Satisfacción probably wouldn’t deem Sacco’s response respectful.

Very shortly after the attack on the Parisian office, Facebook was filled with ‘Je suis Charlie’ cartoons from all over the world, often including pencils sharpened like swords. A couple of days later the general attitude shifted: cartoonists started to depict their ambivalence and made clear that they felt morally obliged to contribute a critical cartoon, but feared revenge from radical Muslims at the same time. Who can blame them? In the Dutch newspaper de Volkskrant (9th of January) Djanko published a cartoon where we see a woman bringing coffee for her husband, who is working at his desk. She says: “I’m glad you’re too cowardly to make jokes about Muslims.” David Paz – also in his studio – shows us a cartoonist diligently at work in an armored suit, and Nate Beeler draws an artist who is threatened by a huge Muslim with a scimitar – though he is not aware of this threat – and complains to the reader that his publisher is threatening him with “cuts”. Robert Crumb published a cartoon on the 8th of January entitled ‘A Cowardly Cartoonist’, where a frightened cartoonist shows a drawing of Mohammed’s hairy buttocks. There is an angle, however: the ass belongs to his friend Mohamid Bakhsh from California! The picture is signed with R. Crumb – showin’ solidarity with my martyred comrads.

Etcetera etcetera. It is tempting to imagine what kind of coffee table book Taschen Verlag could publish with cartoons about the impossibility to make cartoons about Islam. Such a paradoxical volume would contain a wide variety of styles and mentalities, with as little consensus as is visible elsewhere in the world. In March it was announced that the PEN Literary Gala, to be held May 5th 2015, would honour the magazine Charlie Hebdo with the PEN/Toni and James C. Goodale Freedom of Expression Courage Award in response to the January 7 attacks that claimed the lives of many members of its editorial staff. After that, something unexpected happened in the world of free speech: 35 writers refused to give this award to Charlie Hebdo because they thought the French Muslim community had been marginalized enough already. “PEN is not simply conveying support for freedom of expression, but also valorising selectively offensive material: material that intensifies the anti-Islamic, anti-Maghreb, anti-Arab sentiments already prevalent in the Western world.” In other words, we are NOT Charlie!

The final word in this smorgasbord of opinions is for Renald Luzier alias Luz of Charlie Hebdo, the cartoonist who survived the attack. He designed the first cover to be published afterwards, depicting a prophet who says that all is forgiven. On the 1st of May Luz declared: “I won’t make drawings of Mohammed any longer. I’m fed up with him.”

Joe Sacco On Satire – a response to the Charlie Hebdo attacks

J.J. Mcullough: Satire Is Dead. And Cartoonists Killed It.

Pen-club: How and Why 35 Writers Denounced PEN Over Charlie Hebdo